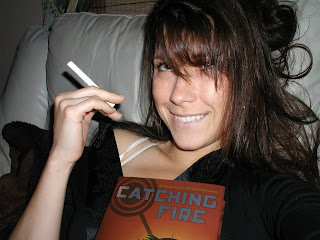 Was it as good for you as it was for me? I don't know, but here are my thoughts.

I finished reading Catching Fire last night. I soaked up the book like a paper towel dipped in a glass of water, osmosis was my weapon. Hours passed, the story hooked me and may I add, snaps for Suzanne Collins. With that said, do I think that Catching fire was as good as The Hunger Games? No. Let me explain. What I did like about Catching Fire even more than The Hunger Games was that it felt more like you're inside Katnis' head and the character felt more comfortable with herself than in the first book. I liked how She was even more isolated, and lonely in the second book. I liked that we got to see more of Gale in this one as well-although in my opinion, it still wasn't enough. You Peeta lovers can stone me later. ;)


What disappointed me a bit-I shall try not to spoil anything-was the twist the plot took halfway through the book. Don't get me wrong I still loved it once I got over the shock. It was just so, so....rerun?? I understand the whole reason Mrs. Collins went this direction, but to have everyone revisit the scenario that made book one so amazing spoiled things for me a little.

This takes me back to what used to be one of my favorite shows, Prison Break. It was so original and fresh, thoughtful and intriguing, witty, and funny. I was addicted. I loved the characters-except for Michael's perpetual scowl that was supposed to make him look ruff. Pftt! HA hahahahaha! Just made him look constipated all-the-time. So they're in prison, they break out of prison, they are on the run-this show was awesome- then, they end up in a different prison that they now have to break out of again-WTF!! This smacked of recycled plot that writers hoped would elicit the same emotions from the viewers it did the first time. Bleeeeck! *leans and pukes into the nearest receptacle* It was a huge let down. I couldn't watch the show anymore, the character ceased to mean anything to me. I was a Prison Break widow, my love was dead.

While Catching Fire went back to the premise for the first book, it still hooked me and I know why the author did it. It was vital for a televised revolt against the Capitol that could happen no other way. I can't wait for the next book.

Suzanne Collins, I salute you. Well done. You left me with another cliffhanger, and I love cliff hangers.