I went to my first book reading last night. I wasn't sure what to expect. I've never been to a reading of any kind before. It was at a place called the Artery. It was this at this place just off downtown that I've driven by a hundred times before and never noticed this art gallery/club/cafe before. It's located two blocks east of the ritzy part of downtown, in the gritty part of downtown. Obscurity is often right next door to the lime light. Sarah came with me. It was an “Inventory of the New World” with local novelist Thomas Trofimuk and Vancouver poet Marguerite Pigeon. Chocolate tasting and salsa dancing. Home-town favourite Thomas Trofimuk read from his acclaimed novel Waiting for Columbus and Vancouver poet and bon vivant Marguerite Pigeon dropped in to read from her mesmerizing collection Inventory, as well as a taste of her soon-to-be published novel Open Pit. But that’s wasn't all. In honour of the ‘new world’ flavours of Thomas Trofimuk’s novel, the Literary Saloon also featured. . . “New world” chocolate tasting, courtesy of Edmonton chocolatier Kerstin Roos of Kerstin's Chocolates / Chocophilia fame. The first of the ongoing lecture series Skills for the Apocalypse. This month’s skill was in keeping with the south-of-the-border theme: Ten Minute Salsa Lesson with of Etown Salsa! Because apparently the post-apocalyptic Canada includes salsa dancing. 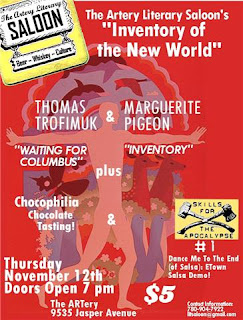 Performer Bios: Marguerite Pigeon writes poetry and fiction. Her first book, Inventory, a collection of 58 object poems, appeared this spring with Anvil Press. She also recently completed a novel called Open Pit. Originally from Blind River, Northern Ontario (of Neil Young fame), she currently lives in Vancouver where she works as an editor. Her first poem about a bruised banana was great, then things got a little angry. The poetry was good. Then her excerpt from her book was...um...a little...choppy. Keep in mind I'm an expert of nothing, but her novel--while sounding interesting--was a bit choppy and distracted with it's flow.

Thomas Trofimuk is a Canadian writer of poetry and fiction. His first two novels; The 52nd Poem and Doubting Yourself to the Bone were both critically acclaimed. His third book, Waiting for Columbus, was released in August 2009 in the US and Canada, and will be published in the UK, Serbia, Poland and Brazil in 2010. He lives in Edmonton, Alberta, Canada with his wife and daughter. This novel sounded very interesting and humorous.

“A man arrives at an insane asylum in contemporary Spain claiming to be the legendary navigator Christopher Columbus. Who he really is, and the events that led him to break with reality, lie at the center of this captivating, romantic, and stunningly written novel.

Found in the treacherous Strait of Gibraltar, the mysterious man who calls himself Columbus appears to be just another delirious mental patient, until he begins to tell the “true” story of how he famously obtained three ships from Spanish royalty.

It’s Nurse Consuela who listens to these fantastical tales of adventure and romance, and tries desperately to make sense of why this seemingly intelligent man has been locked up, and why no one has come to visit. As splintered fragments of the man beneath the façade reveal a charming yet guarded individual, Nurse Consuela can’t avoid the inappropriate longings she begins to feel. Something terrible caused his break with reality and she can only listen and wait as Columbus spins his tale to the very end.

In the tradition of The Story of Edgar Sawtelle and The Dogs of Babel, this unforgettable novel mines the darkest recesses of loss and the extraordinary capacity of the human spirit. It is an immensely satisfying novel that will introduce Thomas Trofimuk to readers who will want to hear his voice again and again.”

Sarah and I had a great time at the reading. There are readings every month, I think we shall go when ever we can. Sarah got her copy of Waiting for Columbus signed, she is now officially star struck. LOL!! Kidding Sarah...ha ha...kidding. Ummm...please don't hurt me. LOL!!
Email Post
Labels: author book reading Marguerite Pigeon poetry reading Thomas Trofimuk