Judging a Book by It's Cover

Bad, cover art! Bad!!! I think quite a few people in the marketing departments of some publishers should commit seppuku. Why would anyone want to pick up a book because of these dreadful covers? I would never want to be seen holding one of these eye-soars, I might die of embarrassment if I did. I would be taunted relentlessly; the tasteless art and heckling of others would follow me around for the rest of my life like a criminal record.

My opinions are based on the cover art not on the authors writing. I am simply judging a book by it's cover. HA haha!

The Gathering Storm. Okay, I know this book is a bestseller. How I feel when I see this cover has nothing to do with the author or his work, but damn. This cover is so lame and melodramatic, it might as well be a daytime soap-opera. Even the quality of the drawing is terrible, the proportions are out of whack. Erg! Good thing you can get it in hardcover, so you can take the jacket off and read it in public.

For real? I know this cover tells us all what's inside, but how can any intelligent woman or man want to be see in public holding this book? It would be like reading Hustler on an airplane or bus. *shudder* What would people think? I don't want the picture to show me how hot the characters are, I want to be attracted to them through the story. Enter female reader's voice of reasoning: "Hmmmm...how should I decide which book to buy? This one sounds good, but, the guy on this book is much hotter. Sold!" Errrrrrrrrg! And women wonder why romance novels are considered cheesy, second rate, and plotless. It's because of cover like these!!!
Dead and Gone, book nine in the Sookie Stackhouse series.

I have recently read this entire series, and believe me it's good. But these covers are horrible! They make you think that these are YA novels, and they are NOT! I believe new covers are coming out for all of these books and not a moment too soon, I was about to go septic.

Old cover. It's a bird, it's a plane, no, it's Dracula dancing up in the sky!
New cover. Ahhhhhhhhh! Much better. 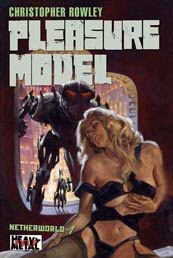 Pleasure Model. Here is why sci-fi is also considered ridiculous. Do you even want to know what this book is about? Probably not, but after I read the jacket out of morbid curiosity, I feel I have to share it with you. You know what the say "curiosity maimed, decapitated, burned, and killed the stupid cat". The jacket reads : Rook Venner is the unlucky cop assigned to a bizarre and vicious murder case. The vic was a high-ranking military officer, making this a political killing—extremely dangerous to everyone involved. The only witness is an illegal pleasure model, a voluptuous gene-grown human with a limited IQ. Plesur’s sole purpose is to satisfy her owner in any way he desires. And her existence makes the case even more difficult. When shadowy assassins destroy his home, Rook takes Plesur into hiding. But as he desperately looks for clues to who wants them dead, Rook may be falling under Plesur’s spell....
Bwah hahahahhahahahahaha! For real? Honestly? Plesur? Oh come on! Stupid, hot, and horney woman in space, space, space. *the announcer's voice echoes off into the abyss* Makes me laugh when guys make fun of romance novels and they're reading this tripe. Makes one wonder how good the plot is when the name of the book focuses on the brain-dead hot chick. Rook may be falling under Plesur's spell? Plesur is weak between the ears, so what does that make Rook?
Bad cover art makes Stella mad! How about you?
Email Post
Labels: Charlaine Harris Christopher Rowley Club Dead Dead and Gone Lora Leigh Mock Cover Art Nauti Deceptions Pleasure Model The Gathering Storm

Jean Davis said…
Bad cover art keeps me from buying a book. That's the first thing I see and if it's horribly cheesy, I'm inclined to think the writing is too.

In the case of the new cover art you featured here, is SO much better than the original.

Guys on the cover of romance novels don't bother me, but on the other hand, if I don't find them attractive, I'm likely not going to pick the book up either. So I guess its kind of a toss up.

I could care less what people see me reading. A book cover with a man's muscular chest, his face, or his whole body as long as he has pants on is fine. But I'm not so comfortable with a cover that makes me question leaving the book on the table with kids around. Such as the last example. "Honey, can you bring mommy her book? It's the one with the woman in her underwear with her hand on her breast. Yep, that's the one. Thanks."
February 17, 2010 at 9:03 AM

Caroline Gault said…
Wow, these really are some awful covers. Were they all made in the last few years? Because they look 50 years old. Awful!!!

Stella Telleria said…
Caroline. These are all covers for books that have been published with inthe last year, other than Club Dead, that was published a few years ago. Terrible right?

Jean, can you pass me that book with the picture of the woman tearing her hair out? LOL! I totally hear you. What are the publishers thinking?
February 18, 2010 at 7:44 AM