On Wednesday I picked up the conclusion to a series I’ve reviewed here. The Summoning and The Awakening by Kelley Armstrong had me re-thinking my aversion for Canadian writers, to read the review click here. The final book The Reckoning had me hoping for the same good reads the first two books had given me. Boy, was I wrong. 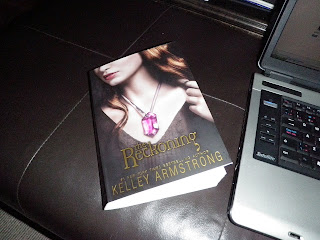 First to the title, The Reckoning, this gives me images of Chloe and her friends getting back at the Edison Group for all that they’ve done to them, for all that they’ve lost, for all the people the Edison Group has killed. The last page in The Awakening has Chloe talking about sabotage and bringing the Edison Group down. I don’t think Chloe could bring down a Janga tower. Grrrrrrrrr!
This book started with promise. Chloe finds spirits in the safe house they are staying in. A safe house owned by other supernaturals who want to bring down the Edison group as well. The spirit is crazy, we find out this spirit is connected to the original owner of the house. Turns out the owner of the house (can’t remember his name because I’m too pissed off) wanted to kill all supernaturals. The problem is that this guy was the founder of the resistance group Chloe and her friends are shacked up with. Turns out things aren’t what they seem and now the gang needs to run away from the house and the supernaturals they thought they could trust. They wait for an appropriate time to run, and they wait, and they wait, and they wait. Grrrrrr! Hey I know, how about the huge Werewolf kid knocks the one guy who stands in their way, out with…I don’t know, any blunt object that can be found in a house…say a frying pan for example, and get on with it!! The odds are in their favor, four to one, if fact. But no, they do the equivalent of picking their noses and get captured by the Edison group, YET AGAIN!!!!! 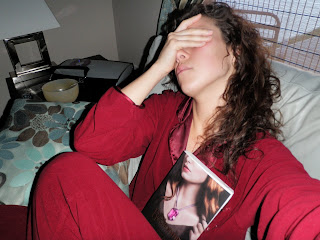 The little voice of optimism pops up in my mind. “Stella, stop clutching the book so tight. You’ll rip it. Stop twitching too, I’m sure the author will wrap this train wreck up well.”
Stella gets contrite. “Oh really, little voice of optimism? You think so? ‘Cause I was just about to use this book for kindling!”
“Easy now, Stella. Put faith in your fellow Canuck. You have only recently found the faith. Stella, put down the foam missile gun!”
“What did you just call me?” 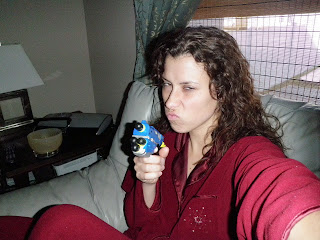 "Huh? I-I called you a Canuck.” Little voice of optimism remembers she is in Edmonton, in the Oilers stronghold and squeaks out the response. “Please forgive me.”

Stella narrows her eyes and clutches her foam missile gun. “I’m no Canuck and neither is Kelley Armstrong.” Stella looks down at the book in her hands, “She’s probably a Leaf’s fan.” Stella throws the book across the kitchen and the little voice of optimism vanishes.

Stella picks the book off the floor. “I’ll give you another chance Kelley, but only because our teams didn’t make it to the playoffs, unlike those vile Cunucks!”

Ahem…where was I? Ah, yes, The Reckoning. In reality the book was progressing with much promise until Chloe and her gaggle of supernatural misfits gets taken back to the Edison group. Then things happened in such rapid succession and in such random ridiculousness that I’m insulted as a reader that I’m supposed to take such a mangled disjointed ending and be satisfied with it. Are you effing kidding me? Chloe enlists the help of a demi-demon (big bad stuff here) she pretty much makes a quick deal with the devil to free the demi-demon if she will help her and her friends escape. This added great tension, how was it going to end, I wondered. The demi-demon saves Chloe and disappears. WTF!! Then Derik busts in to help save them all only to have everyone end up hiding in a storage closet waiting to escape from the…what was it called again (leafs through book to find the name) oh, yes. *enter scared voice* The Cabal SWAT team. 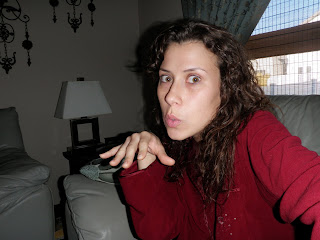 Now if you’re wondering how this SWAT team fits into the story line, you’re not alone. Kelley Armstrong introduces the big bad SWAT team only to have the ceiling collapse on them and Chloe and her gang avoiding running into them altogether. WTF!! Then Chloe kills the main guy by controlling the dead and the story gives us seven pages for a butchered ending that does little in tying up lose ends.
Chloe doesn’t talk to her father to let him know she’s alive. Doesn't tell us why the stone Chloe wears has changed color. Doesn't find out what this Cabal group was all about. Doesn’t send the letter she had promised the ghost. Doesn’t find out about the madness that eventually affects necromancers like her. Doesn’t find out if the friend who betrayed her in the last book is okay, or feeling guilty at all. Doesn’t let her two friends know that they are actually brother and sister. Doesn’t talk about the physiological ramifications about killing someone. AND, doesn’t know what is going to happen to her.

ARE YOU KIDDING ME?? Hello!!!! This was supposed to be the end of a trilogy! End! FINI! FINITO! BUENAS NOCHES!! CABO! FINAL! TERMINO! ACABAR! CONCLUIR-SE! TERMINAR!! FINALIZAR!! …I think you get the idea…


I’ve read that this is how Kelley Armstrong likes to end books so that she can loop characters into other books of hers. I DON”T CARE!! This was poor execution on her part that makes this reader never want to pick up another one of her books again, even though I bought about ten of them. They were on sale at Chapters so I thought why not. Damn you Chapters!! Damn you!!
The only two redeeming things about this book is that we get to see that Chloe ends up with the guy she should have all along. And it wasn’t the perfect hot guy like most YA MCs go for. But the two of them get interrupted at least twenty times by different characters, I’m surprised they even got to know each other’s names. Grrrrrr!!!! The other is that Chloe comes into her own and matures quite a bit, and stops being the pushover she’s been in the previous two books.
I give this book two stars out of ten. The ending could have saved this book, but instead it made everything worse, and made me mad.
P.S.- Yes I’m in my pajamas. Don’t judge me. LOL! ;) I stayed up till 2:30am reading THAT book. I’m tired, I’m cranky, and now I have to wash the soup bowl in the picture from last night. *Simmer*
Email Post
Labels: book review Kelley Armstrong The Awakening The Reckoning The Summoning

Botanist said…
Stella with foam missile gun, now that *is* scary. LOL. I live in Victoria, BC, which is dangerously close to Vancouver. Please don't hurt me.

I think you were very patient with this book. If I've enjoyed previous books by an author then I tend to cut them some slack, but I'd probably have bailed at the point of random ridiculousness. I figure at that point I still retain the right to be angry with the author for wasting my time, but if I press on despite my own misgivings then I have only myself to blame by the end.
May 2, 2010 at 3:02 PM

No harm shall come to you, even though you must cheer for the Canucks due to your proximity to Vancouver. ;)

I am always patient with books. I'll read a series all the way to the end even if a book in the middle was terrible. I think I'm seeing if the author will make it up to me, and once a story starts I just have to know how it finishes.

The foam missile gun only seems to come out when I've read, in my opinion, a bad book. Rest assured no innocent books are hurt in my book reviews. LOL! Here's another example of the Foam missile gun in action: http://www.stellatelleria.com/2009/10/nevermore.html

Thanks for stopping by.

Botanist said…
Hah! Thanks for the link. I love your versatile facial expressions. I think you've been working on that narrow-eyed don't-mess-with-me look since the earlier post.

Small confession...*whispers* I don't actually follow hockey. That's probably a bigger sin than cheering for the wrong team, eh?
May 5, 2010 at 6:30 PM

Stella Telleria said…
I'm a woman, the narrow-eyed-don't-mess-with-me look comes naturally. LOL! ;) That being said that last book really made me mad.

You don't watch hockey? What are you, an alien? LOL! Kidding! Well at least you don't cheer for the Canucks. Tis better to have never cheered, than to have cheered badly.

Botanist said…
No kidding, Stella. I am an alien!

I come from a distant world where hockey is played outdoors and on grass, and where football is a game where you *gasp* move the ball around with your feet! A significant chunk of my blog is devoted to exploring this alien-ness. Yes, I am an alien.

Stella Telleria said…
Ahhhhhhh! You must be a Brit then. Nice! Football should be played with your feet, it only makes sense, right? But what would we call North American football? Clutchball? Tackleball? Hmmmm...I wonder?
May 14, 2010 at 9:39 AM