As many of you know I was on my way to Toronto this weekend with my pal Sarah to attend the launch party for the book my short story was published in. The book, Making It in High Heels 2. 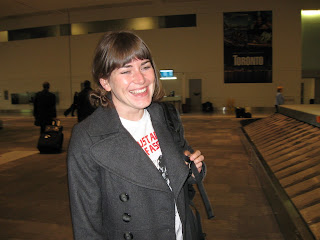 The journey began on Sunday morning at 5am. 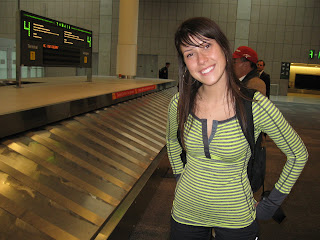 Here we are at Toronto's Pearson Airport and are pumped about what the plans for the next few days would be.
We checked -in to the Hilton across the street from the airport. 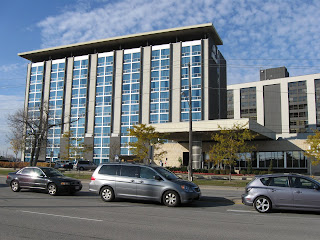 And marveled at the strange set up of the room. The beds were placed back to back in the center of the room. We each had our own TV. Sweet! 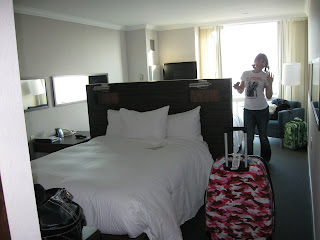 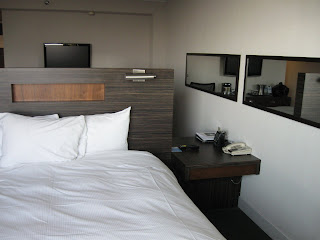 We unpacked an got ready for our first adventure. We had bought tickets online for a haunted house tour of the Power House. The Power House is an old building that provided the power for a psychiatric ward in the 1930's. It was also were they had performed electro-shock therapy on their many disturbed patients. It is believed to be one of the most haunted buildings in all of Toronto. 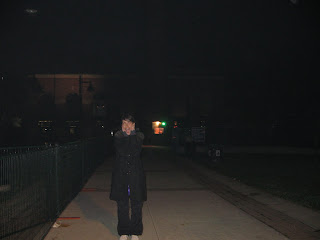 It's hard to see in the picture but there is a huge smoke stack in front of the building which adds to it's creepiness. We couldn't take any videos or pictures inside so we made a video before and after we entered.

We entered the building after one of the workers gave us chilling accounts of strange things that had happened while they had been setting everything up. He also told us about the history of the building. Sarah and I were pumped! Woot! Woot! 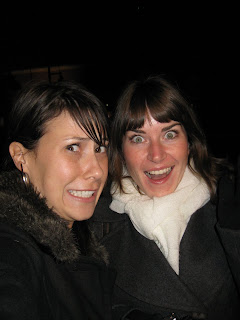 Ahem...for those of you who don't know, this is Sarah's scared face. LOL!

Any-who, we entered the building and a woman's torso that was propped up on a table informed us to not touch anything or else she couldn't keep the evil spirits from touching us. The bottom half of her was mutilated and stretched out on the floor below her, under the table. Awesome! We continued on and in a clear glass box was a little boy in a hospital gown, shaking, and begging us to let him out. Creepy and awesome all at the same time! On we went and turn after turn I was startled out of my mind. The actors, uh, I mean undead psyc-patients would pop out of nowhere scaring us into screaming, swearing, and uncontrollable scared fits of laughter.

These people had thought of everything. There were zombies, vampires, chainsaw packing lunatics, mental patients screaming as if they were still being tortured, deformities, torture chambers where the tortured screamed for help as the torturers chased us with knives. There was even a clown section. We entered a chamber and walked across a bridge as a circle tunnel of blackness and flashing lights circled around the bridge. It was so disorienting I had to touch the railing to make sure the bridge wasn't moving. Uber amazing! We ended up outside in a maze of a corn field where we relived the Texas Chainsaw Massacre. We ran as a masked lunatic with a roaring chainsaw chased us as we screamed and laughed ourselves silly. A woman was grouped together with Sarah and I. While Sarah and I wanted to go through the house slowly this woman kept pushing us forward, we tried to let her pass us many times but she never wanted to be first. Pffftt! CHICKEN! Lol! At times the fog was so thick in places we couldn't see four feet in front of us, allowing for murders to just pop out of virtually nowhere to scare us. We walked through a haunted rain forest were we had to duck out of the way to avoid touching spiders, vines and dead things.

We had so much fun! Here is the after video:

They even had a pimped out hearse. 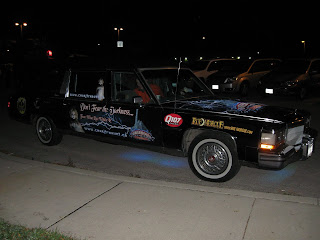 It was totally worth the inflated cab fare it took to get to the Power House. Didn't help that our cab driver took a wrong turn. He even had a GPS. What gives?

I can't wait till Halloween.

Stay tuned. Next post shall be the launch party the following day.

CJ Dawson said…
Man! That place sounds friggin awesome!If I ever have to go to Toronto for anything I am def. checking that place out!
October 27, 2009 at 6:28 PM